Finding the closest pair of Point in a given collection of points is a standard problem in computational geometry. In this article I'll explain an efficient algorithm using plane sweep, compare it to the naive implementation and discuss its complexity.

This problem is standard, but not really easy to solve in an efficient way. The first implementation we think of is the naive one, comparing each point to each other point.

In my examples, I'll use the java.awt.Point class to represent a point. This naive implementation is really easy to implement :

As you can directly see, this naive implementation has a complexity of O(n^2). But we can do a lot better using a plane sweep algorithm.

With that algorithm, we'll sweep the plane from left to right (right to left is also a possibility) and when we reach a point we'll compute all the interesting candidates (the candidates that can be in the closest pair).

For that we'll make the following operations :

So when we found a new min distance, we can make the rectangle of candidates smaller in the x axis and smaller in the y axis. So we made a lot less comparisons between the points.

Here is a picture illustrating that : 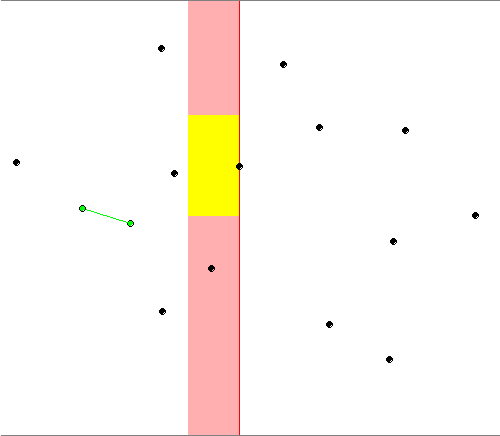 There is always a maximum of 6 points in the yellow rectangle, the 4 vertices, the point with the same coordinates as the current point and finally the point in the same y coordinate and in the limit of the x axis. Even if the maximum is 6, you'll almost never have more than 2 points in that list (the maximum is see in my test was 3 with a collection of 1'000'000 random points). You can see this 6 points here :

If all that stuff is not really clear for you, you can watch it in action here in a Java applet.

The candidates must also be always sorted. For that, we'll use a Binary Search Tree for good performances.

If we look at the complexity :

So it's really better than O(n^2) for the naive implementation.

So now, we can go to the implementation in Java.

The code isn't overcomplicated. We see all the steps explained in the article and that works well. The Horizontal and Vertical comparators are really simple :

Like you can see, this is really better than the naive implementation. So we make a good job. But if we make one more test with 10 elements :

Now our good sweeping algorithm is slower than the naive !

When we think about that, we realize that it's logical. In fact we made a lot of computations before starting the algorithm like sorting the points, creating a list of candidantes, ... All that stuff is heavier than make n^2 comparisons in little number. So what can we do to have good performances with small number of points ?

And we've good performances for little set of points :)

So our method is now complete. I hope you found that post interesting and that will be useful to someone.