You want buy a new computer, but you cannot which hard disk to buy ? Or you want to buy a new hard disk for your computer ? So, this article is done for you. It will describe all the things you must be careful of when choosing a hard disk.

The hard disk is the element who enables you to store data of your computer. The operating system, your programs, your games and your documents will be stored in this device. So be careful not to stifle your computer choosing an inadequate hard disk.

So you have to control some criterias, like the capacity or the rotation speed. 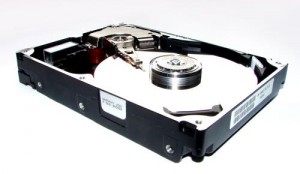 The capacity of the hard disk is the quantity of informations it can store. This is the first choice critera, people often search some storage space. But this capacity depends of your needs. The capacity is calculated in Go (Gigaoctets) and the price is directly depending of the capacity.

To evaluate the necessary capacity, here are the capacity for some applications or files :

Of course, this is only estimations, but that can allow you to make an idea of what you need.

It's not usefull to buy a enormous hard disk when you have only some Word documents to store. The sellers will often try to sell you the biggest hard disks. So keep in mind your needs.

For example, a 1 To hard disk can contains :

So you can see that this kind of hard disk is often not necessary. I don't say that's a bad idea but it's a good thing to estimate your need before choosing an enormous (or too small). It's not really interesting to use moyen for space that we'll never use.

The first thing to decide is the physical format of the hard disk. There is 2 main formats of hard disks, namely :

There is still the problem of external hard disk. In this case, the hard disk is directly inside a container, so this is not a big problem. If you search a little hard disk, opt for a 2"1/2 else in most cases, choose a 3"1/2.

The next thing to verify in the interface of the hard disk. That is the way the hard disk will be connected to the motherboard. You cannot connect a SATA hard disk on a motherbord that have only IDE. Here are the main existing formats :

You also have to keep in mind that hard disk are limited in tranfer rate due to their mechanic state. So the transfer rate of the interface is mostly useful when several hard disks are connected on the same bus.

For a new PC, it's recommended to opt for SATA hard disks who are the new standard for hard disk. If you really want big transfer rates with many disks or if you want to build a server, you can choose SCSI or SAS depending on your budget.

The hard disk is often the slowest element of a PC. It's a lot slower than a processor. It's especially because it's mechanic. A disk is composed of a plate in constant rotation and a read/write head who moves on the plate to read and write the data. So we can improve the data transfer rate improving the rotation speed of the plate. But keep in mind that doesn't really improve the access time because for the transfer time, the principal problem is the shift of the head.

We have to distinguish here the 2"1/2 and 3"1/2 format because the speeds are not the same.

A hard disk with 5400 rpm is still comfortable, but it's really a good investment to buy a 7200rpm hard disk.

For the hard disks for store your data, I recommend to use 7200rpm hard disk. But for the main disk, to store operating system and your programs, i recommend a 10'000 rpm with little capacity (36 or 72 Go). That will improve the start of your system and of your programs. It's really comfortable to work with.

The actual hard disk have also a cache memory. This memory is used to store the most used data bits that can be reused. When this data are requested, they come directly from the memory cache so without mechanical access, this is faster. We have several memory cache sizes :

It's a bad idea to buy disk with less than 8Mo of memory cache. If you can, i recommend you to buy hard disk with at least 16Mo. 32Mo or 64Mo will be better but more expensive.

We call an external hard disk an hard disk who stay outside the computer. This kind of hard disk is inside a container and connected to the computer with a FireWire or USB interface. This is really practical to move data.

An other possibility is an eSata interface who start to be available with the last computer and laptop, but not on all the computers. This the external version of the SATA format.

If you choose an external hard disk in USB, take care to the supported USB version of your computer. Indeed, the USB 1.0 is really slow to make data transfer. If you don't have USB 2.0 in your computer, don't buy an USB hard disk. Otherwise choose an hard disk with USB 2.0 or 3.0 if you have a really recent computer. Normally the USB 3.0 hard disk are compatible with older standard.

The SSD (Solid State Drive) is a recent technology but that grows quickly. This is a hard disk but without any mechanic element. The transfer rates are better, the time to start the device is almost null and the device make no noise. Moreover the power consumption is lower and the crashworthiness is also better.

Nevertheless, the SSD have a limited life duration. Indeed, the memory cells supports only a maximal number of write cycles. This tend to be improved. By example Intel has announced a life duration of 5 years for his SSD X25-M.

If you want to try SSD, this can really improve the start time of your computer and of your applications. So it's interesting to opt for a little SSD for the operating system (32 or 64 Go). But it's not reasonable to use a SSD to store data.

In conclusion, although the capacity is really important, this is not the only criteria. You have to keep in mind the performances of the hard disk (memory cache, rotation speed, interface) to not decrease performances of your computer.

Be also careful of the constructor and the series of the hard disk. It's a good thing to buy a more expensive one of a good construtor instead of a noname hard disk with several problems. Indeed, some series have problems and don't keep their promises at the level of the transfer rate. To know if a hard disk has a good reputation, the best thing is to consult comments of buyers in the sell website.