I have updated my asgard project to make it finally useful for me, so I figured I'd present the project now.

Asgard is my project of home automation based on a Raspberry Pi. I started this project after Ninja Blocks kickstarter company went down and I was left with useless sensors. So I figured why not have fun creating my own :P I know there are some other projects out there that are pretty good, but I wanted to do some more low level stuff for once, so what the hell.

Of course, everything is written in C++, no surprise here. The project is built upon a server / drivers architecture. The drivers and the server are talking via network sockets, so they can be on different machines. The server is displaying the data it got on a web interface and also provide a way to trigger actions of drivers either from the web interface or through the integrated rules engine. The data are stored in a database, accessed with CPPSqlite3 (probably going to be replaced by sqlcpp11) and the web server is handled with mongoose (with a c++ interface).

I must mention that most of the web part of the project was made by a student of mine, Stéphane Ly, who work on it as part of his study.

Here is a picture of the Raspberry Pi system (not very pretty ;) ): 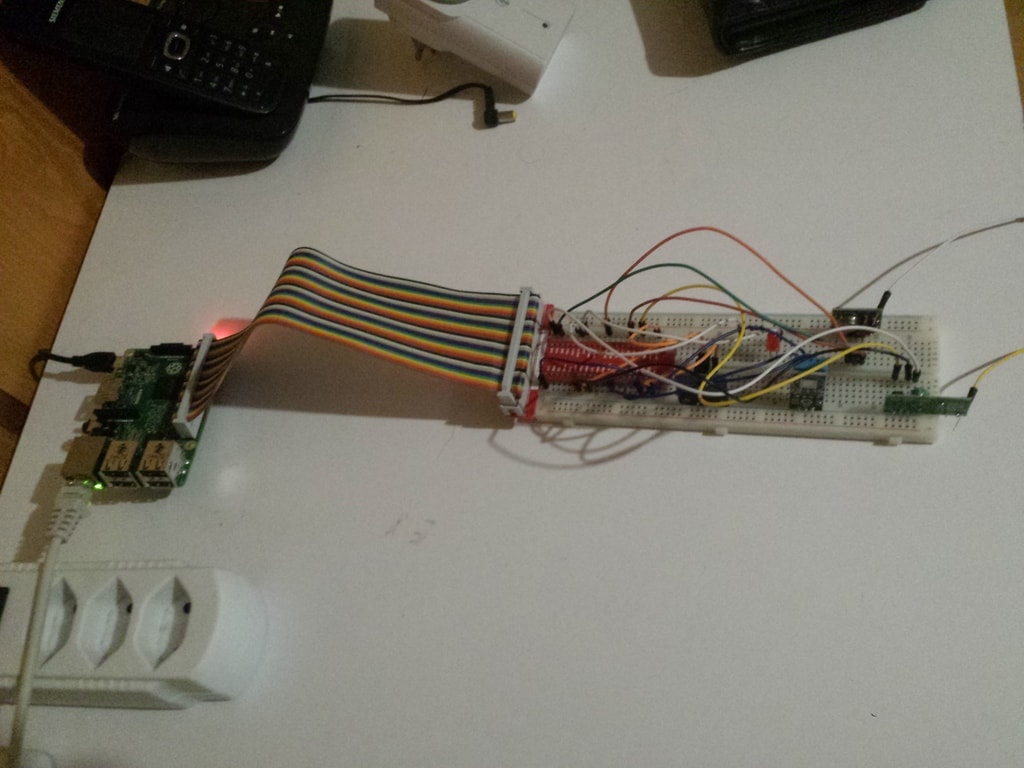 I plan to try to fit at least some of it on a nicer box with nicer cables and such. Moreover, I also plan to add real antennas to the RF transmitter and receiver, but I haven't received them so far.

You can see the sensors data displayed on the web interface: 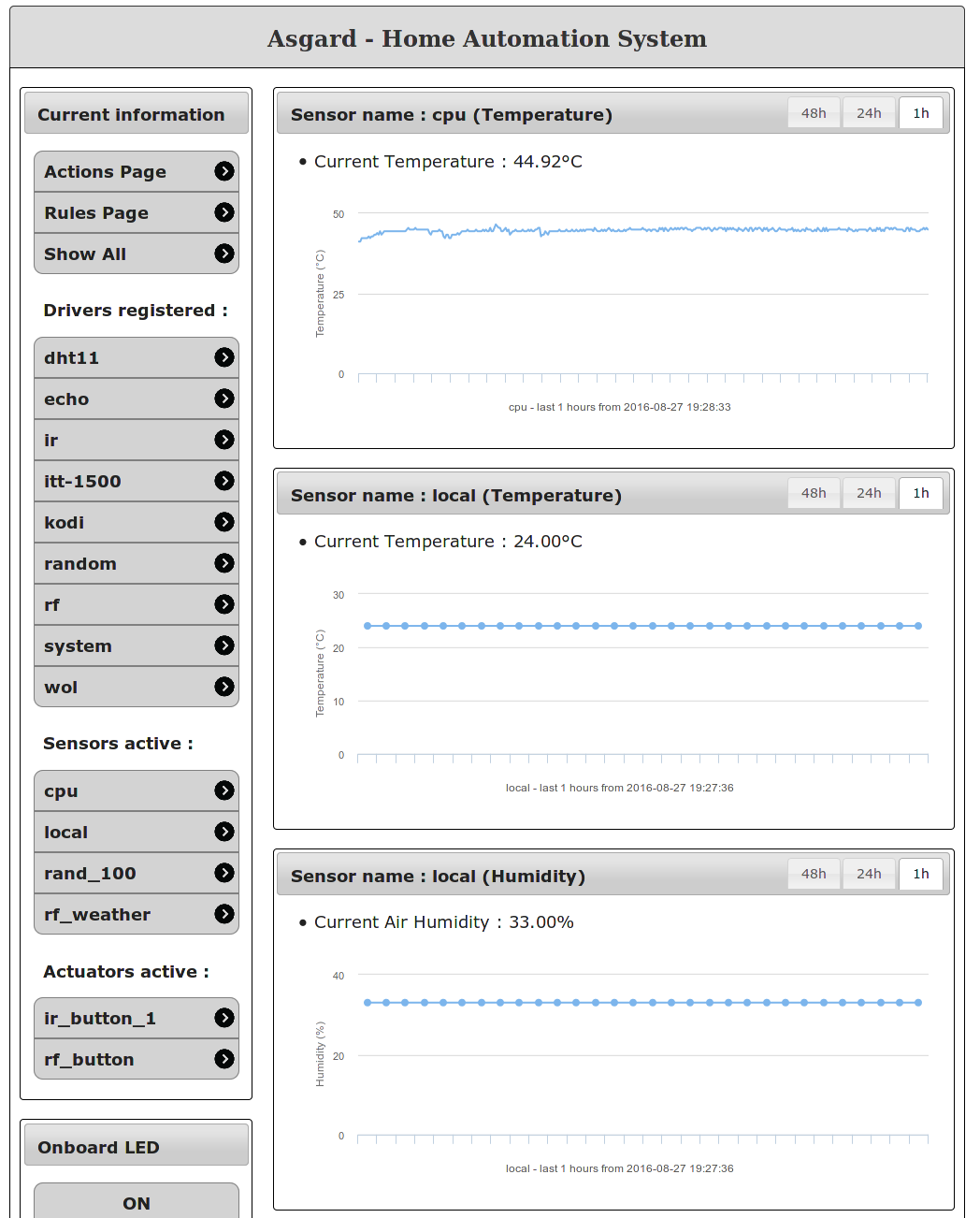 There are currently a few actions provided by the drivers:

Here are the rules engine: 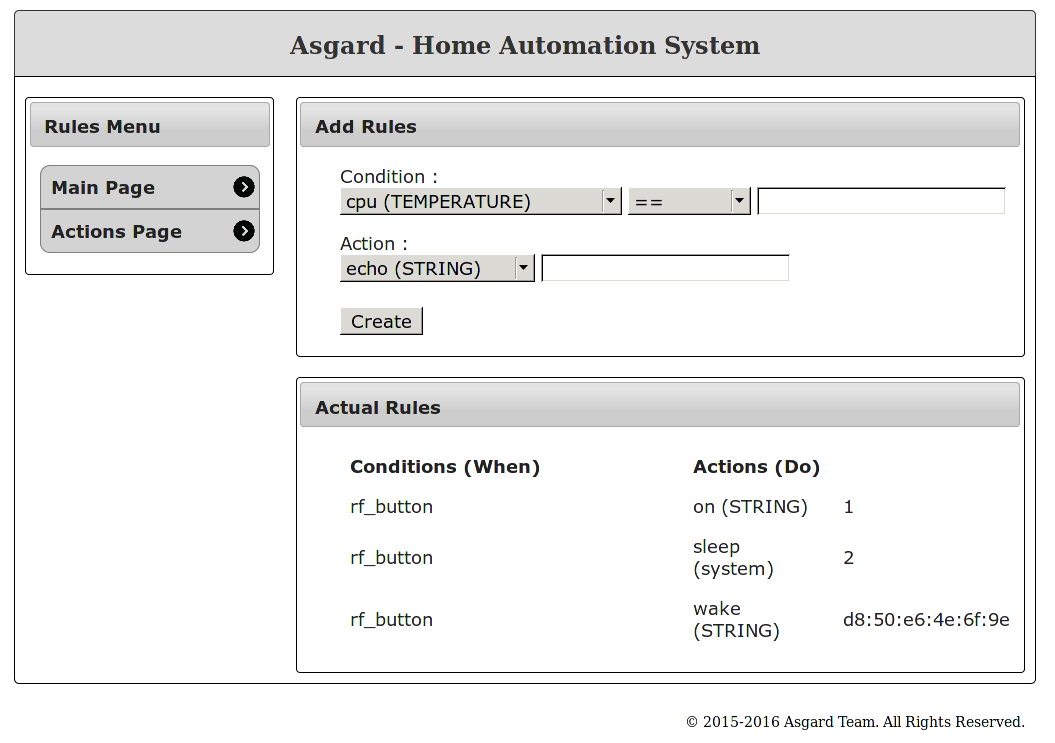 I'm currently using this system to monitor the temperature in my appartment. Nothing great so far because I don't have enough sensors yet. And now, I'm also using a wireless button to turn on my power socket, wait 2 seconds and then power on my Kodi Home Theater with wake on lan.

It's nothing fancy so far, but it's already better than what I had with Ninja Blocks, except for the ugly hardware ;).

There are still tons of work on the project and on integration in my home.

However, I don't know when I'll work on this again, my work on this project is pretty episodic to say the least.

The code is, as always, available on Github. There are multiple repositories: all asgard repositories. It's not that much code for now, about 2000 lines of code, but some of it may be useful. If you plan to use the system, keep in mind that it was never tested out of my environment and that there is no documentation so far, but don't hesitate to open Issues on Github if you have questions or post a comment here.