Bullseye is a commercial Code Coverage analyzer. It is fully-featured with an export to HTML, to XML and even a specific GUI to see the application.It costs about 800$, with a renewal fee of about 200$ per year.

I'm currently using gcov and passing the results to Sonar. This works well, but there are several problems. First, I need to use gcovr to generate the XML file, that means two tools. Then, gcov has no way to merge coverage reports. In my tests of ETL, I have seven different profiles being tested and I need the overall coverage report. lcov has a merge feature but it is slow as hell (it takes longer to merge the coverage files than to compile and run the complete test suite seven times...). For now, I'm using a C++ program that I wrote to combine the XML files or a Python script that does that, but neither are perfect and it needs maintenance. Finally, it's impossible to exclude some code from the coverage report (there is code that isn't meant to be executed (exceptional code)). For now, I'm using yet another C++ program that I wrote to do this from comments in code.

Bullseye does have all these feature, so I got an evaluation license online and tried this tool and wrote a short review of it.

The usage is pretty simple. You put the coverage executables in your PATH variable and activate coverage globally. Then, we you compile, the compiler calls will be intercepted and a coverage file will be generated. When the compilation is done, run the program and the coverage measurements will be filled.

The coverage results can then be exported to HTML (or XML) or visualized using the CoverageBrowser tool: 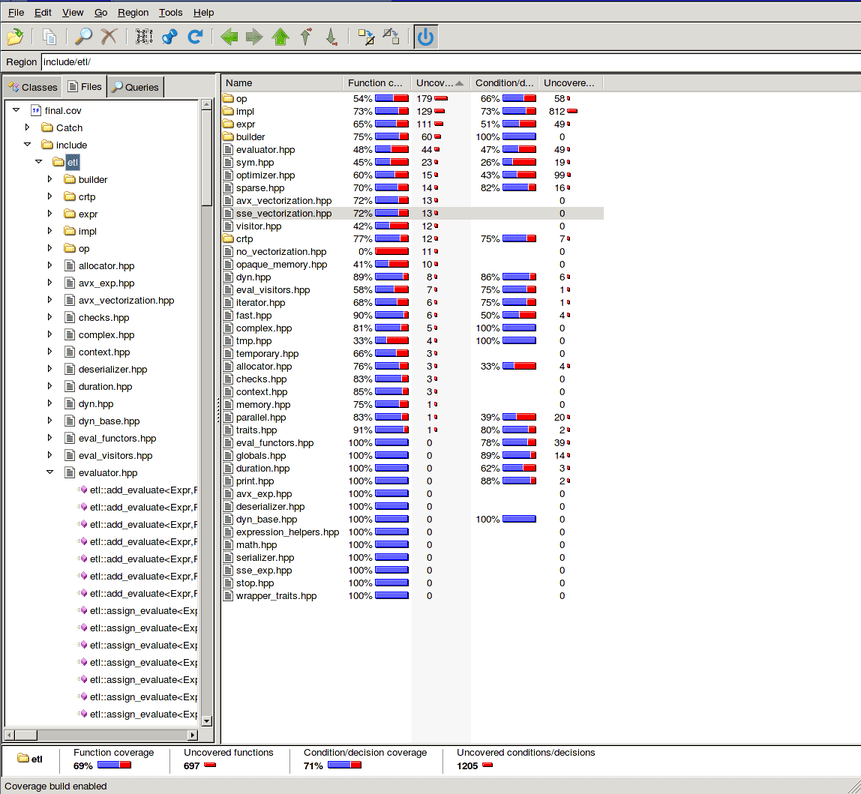 The main view of the Bullseye tool code coverage results

It's a pretty good view of the coverage result. You have a breakdown by folders, by file, by function and finally by condition. You can view directly the source code:

The source view of the Bullseye tool code coverage results

If you want to exclude some code from your coverage reports, you can use a pragma:

So that the condition won't be set as uncovered.

As for the coverage, it's pretty straightforward. For example:

and it's really fast. Unfortunately, the merging is only done at the function level, not at the statement or at the condition level. This is a bit disappointing, especially from a commercial tool. Nevertheless, it works well.

To conclude, Bullseye seems to be a pretty good tool. It has more features than standard gcov coverage and all features are well integrated together. I have only covered the features I was interested in, there are plenty of other things you can look at on the official website.

However, if you don't need the extra features such as the visualizer (or use something like Sonar for this), or the merge or code excluding, it's probably not worth paying the price for it. In my case, since the merge is not better than my C++ tool (both do almost the same and my tool does some basic line coverage merging as well) and I don't need the visualizer, I won't pay the price for it. Moreover, they don't have student or open source licensing, therefore, I'll continue with my complicated toolchain :)