If you remember, I talked about my home server project in a previous post. I had installed an old Dell Poweredge server, a 3com gigabit switch and a monitoring console. The problem with this configuration was that it was too noisy as the rack is installed in my apartment.

The first thing I did was to replace my old 3Com switch with a Zyxel managed fanless switch. Being fanless, this switch is completely silent which makes a good difference :)

After that, I have replaced the Dell server with a custom installation in a Norco-RPC 230 case. The basic case comes with two 80mm fans in the front. These two fans are very powerful, but they are quite noisy. I replaced them with two Enermax T.B. Silence 80mm fans. They are almost silent, it is really great. It is probably not enough airflow for a large configuration, but in my case, I think that this will be largely enough.

I plan to install new services on the future, but I have no plans for now.

Here is a picture of the rack in its current state: 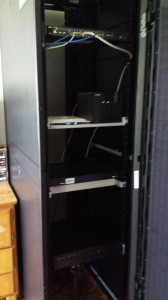 I have also installed my router and the NAS on a layer in the rack.

You can't see it, but I have also added to rackable PDU on the back to have to organize a bit the cables. Even if it still not perfect, it is already better than before.

For now, I think that my system in in good shape. When I will have some more budget, I will replace QNAP NAS with a custom server, probably again with a Norco case.